Before Krishnamacharya, yogis were typically ascetics (often called Saddhus) who lived solitary lives of study and devotion. Saddhus have an element of wildness to them, living on the fringes of society, plumbing the depths of personal liberation through meditation, yoga, and ritual. Often, they are mystics, specializing in various related arts including astrological counseling or healing, formulating complex ayurvedic treatments called rasayanas for the sick.

Krishnamacharya changed things, however. I’m trying to think of an appropriate analogy – Krishnamacharya was as well educated in Hindu philosophy, yoga, Sanskrit, ayurveda, and vedanta as say a Jesuit priest is educated in Latin and Greek, canonical law, scripture, the writings of church fathers, and so forth. But instead of taking the equivalent of Holy Orders, and living as a Saddhu, Krishnamacharya instead returned to the general public and to what has been termed the “Householders.” His students, including his son, TKV Desikachar, carried on the tradition of teaching and assisting Householders. 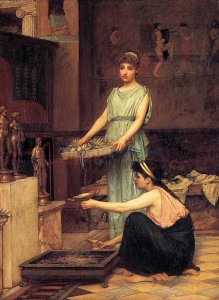 Householders are individuals who have spouses, families, jobs, pets, and a mortgage, but they also want to have a rich religious experience. They are just not, for whatever reason, interested in the solitary life of an ascetic.

I first learned of the term Householder when I was in yoga teacher training. I found that I immediately identified with this term, despite not being a Hindu. I have long had a great affinity for the indigenous religion and Gods of India and find that as a Polytheistic Pagan, I share similar practices and approaches. This is why I read P. Sufenas Virius Lupus’s blog post on polytheistic laity with interest.

I first learned the word laity during my brief period as a Roman Catholic. According to the dictionary, laity is a term which distinguishes a subset of a religious group from the clergy. But, as I have come to find, some words carry so much connotation as to become almost unrecognizable from its dictionary definition. The word Pagan for instance – a word that by its dictionary definition absolutely applies to me – but its common use by the loosely related neopagan communities has rendered the term ambiguous at best. But I digress.

While I recognized that PSVL, as a priest or polytheistic clergy person was simply differentiating emself from non-clergy, I found myself wondering to which camp I belonged. By no fault of eirs, I tend to associate the word laity with Catholicism (and other Christians), and other than a few things Catholic laity can do on their own (pray, say the rosary, set candles, etc.), religious engagement requires the mediation of a priest.

I have belonged to groups of fellow Pagans and Witches in the past, but for me, it has been problematic and unsatisfying (a post for another day). I find that my interests, and the places my Gods, Spirits, and Ancestors lead me to are frequently out of sync with the agendas of fellow religionists. It is assumed that members will eventually want to lead their own groups and the circle or coven is meant to be a training ground for these future leaders. Unfortunately, interfaith, public relations, and performing public rituals are not my calling. Though I have performed semi-public rituals, I dread every minute of it. In short, this means I have zero interest in being a Priestess who maintains relationships and obligations with the Gods and Spirits, not only for herself, but on behalf of her community. No thank you.

But Priestess of my own Household? Yes please. This I can do. This I can do well. I strive to be the equivalent of the Martha Stewart of Householders. I pour the wine. I pour the oils. I light the candles and the incense. I offer prayers and songs. I clean and maintain the shrines and altars. I offer readings and hospitality on occasion. I celebrate the Holy Days of my Gods.

I have a large, framed print of Waterhouse’s The Household Gods in my kitchen, to remind me it is the heart of my home. I strive to make even the most mundane of household chores infused with honor for my Gods or my Ancestors.

But I also change the oil in my car, go grocery shopping, and sometimes I sit on my couch and watch a Giants game or a NASCAR race.

I have found being a Householder suits me well, and this is the label I claim for myself.